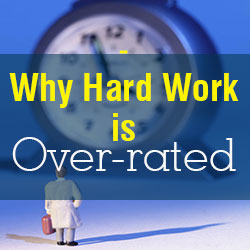 For years, the diligent hard working employee and the executive with the Type-A personality have been held aloft as the ideal archetype for the productive workforce. They have a killer instinct, they put in the hours, they make the calls, they are role models for others to look up to and emulate.

However, the ensuing digital and information revolutions have meant that this kind of routine-based work is highly likely to be automated or outsourced, if not now, then very shortly.

It also means that we need a more creative, adaptable and intuitive workforce if we’re going to build businesses that survive into the future.

So how does this make hard work, if not redundant, then a little misdirected?

Anyone who has struggled to write something original on a Christmas or birthday card has some understanding of how difficult the creative process can be and also how counter-productive simply adding pressure and effort is.

Creativity, including things like innovation, problem solving and relationship building, are often the result of filtering, synthesizing and leaving time for development. Some of these processes simply take time.

But the issue isn’t simply that non-linear work doesn’t benefit from diligent blood, sweat and application, it’s also that it is often completely unproductive effort, which can take us in the wrong direction.

So what then is the solution? Well, it turns out; laziness can in fact be rather a useful asset.

If you’re a member of your organization’s executive or a manager of people, we’ll allow you a moment to pick yourself up off the floor so that you can re-read the above statement, as we realize, on the surface of it, it amounts to corporate heresy.

However, before you dismiss our assertion as the ranting of two lunatics or assume we are “typical millennial slackers” (we are neither), allow us to make the case for laziness.

Rarely do hard workers allow their minds to wander, to question, to consider, “is there a quicker, easier, less labor intensive method that would allow us to achieve the same result.”

This of course is not an entirely original theory, in fact General Hammerstein-Equord, in writing the German manual on military unit command, known as Truppenführung, observed: ‘I divide my officers into four groups. There are clever, diligent, stupid, and lazy officers. Usually two characteristics are combined. Some are clever and diligent—their place is the General Staff. The next lot is stupid and lazy; they make up 90 percent of every army and are suited to routine duties. Anyone who is both clever and lazy is qualified for the highest leadership duties, because he possesses the intellectual clarity and the composure necessary for difficult decisions. One must beware of anyone who is stupid and diligent—he must not be entrusted with any responsibility because he will always cause only mischief.’

Not that we should base all of our management theory on the German army of the 1930’s, but he makes an interesting observation. Laziness and innovative thinking are linked, if not intrinsically, then at least statistically.

The point is, in an age of hyper-connectivity, high-collaboration and logarithmic change; perhaps working hard is less of an asset than working clever.

Dan Gregory & Kieran Flanagan are behavioral researchers and strategists, specializing in behaviors and belief systems – what drives, motivates and influences us. They have won business awards around the world for Innovation, Creativity and Return on Investment working with such organizations as Coca-Cola, Unilever, News Corp and the United Nations in Singapore. They are passionate advocates for the commercial power of creativity and a return to more human engagement, cultures and leadership. Published by WILEY, Dan and Kieran’s new book Selfish, Scared & Stupid is available in paperback RRP $22.95 from www.selfishscaredandstupid.com.