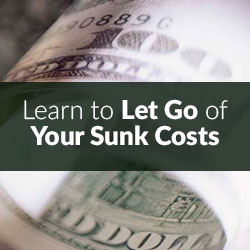 Of the many valuable ideas I learned in business school, many years ago, few have served me better over my career than the “Sunk Cost Theory.” For those who need a refresher, the theory goes like this:

Yesterday you installed a new machine on your factory floor. It cost a million dollars. It will produce one hundred widgets an hour for one dollar each. Today a salesperson is trying to sell you yet another machine to replace the one that just started working for you today. The cost is another million dollars, but it will produce two hundred widgets an hour for a cost of twenty-five cents each.

You can sell all of the widgets either machine can produce at a net price of two dollars per widget. You can run either machine twenty-four hours a day. Should you purchase the new machine?

Sunk Cost Theory says, “The cost of the old machine is entirely irrelevant. It’s a sunk cost. The money is spent. It’s gone. Forget it. The only relevant question today is, ‘Can you earn a greater future profit from the machine you have, or from a new one.’” It makes no difference if your present machine was installed today or fifty years ago. You only have to consider the future.

Determining whether or not to factor a sunk cost when making decisions is one of the most common dilemmas that businesspeople from various industries face. Why? The answer is simple. It’s really difficult for our minds to let go of something we have invested in until we get the desired return on our investment. And if it’s an idea or venture that is very close to your heart, then letting go can be more of an ego issue.

But when you think rationally about a sunk cost, it always makes perfect sense to shut down any venture that doesn’t show any signs of recovery. If it’s an idea destined to failure from the beginning, then it will eventually fail no matter how much money you pump into it. You can’t bring a dead man back to life by supplying him with more oxygen, right?

From a business perspective, it’s always important to develop a habit of looking for future opportunities, rather than dwelling on past investments. For example, say you’ve bought a brand new machine to install in your factory for making shirts, but for some reason (marketing, sales, quality, or contracts) you are not getting the desired ROI. You should know when to draw the line before it’s too late. Just don’t keep dragging your feet over a business idea that isn’t turning a profit. A sensible business decision would be to sell off that machine or even scrap it.

Initially you will find it extremely difficult to give up on your sunk costs, but believe me it’s the reasonable choice to make. And this advice is coming from someone who has been down this road many times before, and learned the hard way how difficult it can be to let go of sunk costs. What is gone is gone and only a fraction of its cost can ever be salvaged. Don’t let your mind trick you into investing extra money into doomed ventures or you’ll be a victim of the sunk cost fallacy.

To avoid falling into the “sunk cost trap,” I suggest that before you enter into any new venture, always ask yourself what is the absolute maximum time and money you are willing to invest. The answers you get will be the demarcated lines that you should never cross.

President of a commercial real estate company worth $1.5 billion dollars and New York Times bestselling author, Alan Fox shares his powerful advice on careers, relationships and self-improvement in his award winning series PEOPLE TOOLS. Alan has degrees in accounting, law, education, and professional writing. He was employed as a Tax Supervisor for a national CPA firm, established his own law firm, and then founded his commercial real estate company in 1968. Alan has recently been featured on The Meredith Vieira and Steve Harvey shows. Discover more about Alan at www.alancfox.com