“Do well by doing good” is an old adage which I believe is very true when it comes to business. Charities do a wonderful job serving those in need. However, that doesn’t mean for-profit companies should not try to positively impact the community, even if those actions don’t immediately produce an identifiable return. During the past 25 years, Field of Flowers has taken on many “good citizen” projects that fall into that category.  I strongly believe that this has increased the profits of our business over the long term. The types of projects we have taken on tended to be ones that our shareholders, associates or customers felt passionately about. 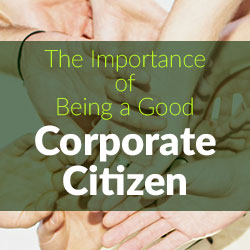 When our armed forces were fighting in Kuwait and Iraq, we had a young female employee whose fiancé was fighting with one of the “tip of the spear” units there, under terrible conditions.   How could we express our gratitude to him and his fellow soldiers for the hardship and risks they were facing in order to defend us? With the support of our company, our employee put together a promotion whereby the public could drop off items such as sunscreen and snack foods at one of our stores. We packaged them and arranged to have them delivered to the troops. We received numerous messages from military people who appreciated the care packages. We also let the media know what we were doing and they responded with several nice articles in which our company was prominently mentioned. Our associates felt good about doing something concrete to support the troops; and we truly didn’t do it for the PR.  (By the way, the fiancé returned safe and sound from Kuwait. He came and visited us on his return to personally thank us. They married and lived happily ever after.)

We later decided to help our armed forces by offering to deliver a flower arrangement at no charge to the mother or spouse of any active military person who was stationed in Iraq and had a mother or spouse in our area. Through a contact at the National Guard, we were able to deliver dozens of floral arrangements. Again, we alerted the media and they jumped on it, featuring the program in several segments and stories, including a live crew that met our driver at the home of a surprised recipient. We repeated the program several times on Valentine’s and Mother’s Day as, unfortunately, our troops remained overseas longer than expected.

More recently, we provided valuable assistance closer to home. Two of our own employees are battling cancer.

Jessica is a dispatcher in our delivery department.  She has been receiving treatment for Hodgkin’s lymphoma, including many rounds of chemotherapy and radiation. She is unable to work for at least three months, three weeks of that time she will be hospitalized and unable to see her children. In her words, “Having battled this disease while carrying my beautiful, and thankfully healthy twins, I know I can do anything!  I know I will get through this and I will win!” However, trying to care for her three children and balance out the accumulating medical bills is overwhelming.  On top of all this, her fiancé (and the father of her twins) sadly passed away recently.

Jen, who is the leader of our Order Center team, has Stage IIIC Triple Negative breast cancer, the worst breast cancer to be diagnosed with, only affecting 30 percent of all women diagnosed with breast cancer. Earlier this year she had a bilateral mastectomy. Unfortunately, she had complications and became immune-compromised, meaning she was unable to fight off simple infections. This has caused her to miss months of work.

The courage of Jessica and Jen has been an inspiration to us, and our associates have responded in a remarkable and heart-warming manner, collecting money among our own group, organizing garage sales and helping spread the word. Field of Flowers has kept their positions open and continued to pay their health insurance premiums while they were not working. The important benefits of helping our own associates are increased loyalty and dedication from our entire team.

Another charitable initiative we launched is a program called Stemming from Love, whereby we could give back to our community on a regular, ongoing basis. Our partners are not-for-profits that serve a broad range of clients in South Florida, have a strong volunteer board, spend a large portion of their income on providing services and have the willingness and ability to promote the program to their groups of supporters. Field of Flowers designs a customized arrangement, which is exhibited on its online store, fieldofflowers.com.  At the same time, the charity partner promotes the partnership and special arrangement to its group of supporters, informing them that Field of Flowers will donate 20 percent of sales to the charity. Customers who purchase the floral arrangement receive beautiful flowers and help the charity to help the people of South Florida. Stemming from Love was launched in May and has already raised hundreds of dollars for its partners. We aim to partner with a different charity every month or so. And, of course, while doing good, we expect to do well when supporters of these worthy organizations become introduced to Field of Flowers, some for the first time.

Sustainability: Good for the Environment, the Bottom Line and Employees
Information Technology – The Secret to Earning Venture Rounds
Getting Lean and Staying Lean in Manufacturing Staffing

Donn Flipse is the president and owner of Field of Flowers, based in Florida. This year marks a major milestone for Donn and his family – their 100th Anniversary of being in the flower business. To learn more about Field of Flowers, please visit: www.fieldofflowers.com.