I am working at my desk.  I hear a soft chime, and up pops an e-mail from one of my investors. He’s asking the same question he has already asked me three times in the last two months ago.  It would take me an hour to research and answer his question, just as it would have taken me the first time he asked.  Now my investor is upset and I am under increasing pressure to perform.  What to do, what to do? 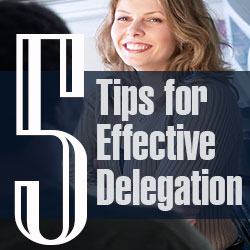 Instead of doing the research myself, I forward my investor’s request to my assistant with a note, “Please prepare a draft.”  That takes me ten seconds.  The question will soon be answered.

I’ve been in the commercial real estate business for more than fifty years, and for most of that time I’ve been the president of my own company. One of the most challenging, and potentially rewarding, skills that I’ve had to master over the years is delegating, or what I call “giving it away.”  And while I still have trouble handing off tasks to others, I’ve also learned a thing or two about the simple—and extremely effective—art of delegation. Here are seven reasons why we fail to delegate, and five tips on how to delegate better.

7 Reasons Why We Don’t Delegate

1.  Ego.  Despite thousands of occasions in which I successfully delegated a task, which often was performed better by someone else, I still believe I can do a better job than anyone.

2.  Cost.  Like all business owners, I am cost conscious so I often refuse to delegate because I don’t want to pay others for their time. In doing this I ignore the fact that my time (as the owner and president) is much more valuable than theirs.

3.  Time.  Even with plenty of evidence to the contrary, I still do not trust others to follow through in a timely way.  Ironically, my failure to promptly “give it away” more often creates a longer delay than if I delegated immediately.

4.  Ignorance.  Dumb and dumber.  Like many people, when I don’t know what to do, I do nothing.  Of course, this means that the problem often gets bigger.

5.  Fear of Rejection.  I often fear that any answer or action will offend someone who will then reject me in some way.  I once failed to delegate the filing of an estate, and my client ultimately took the case away from me. It’s better for me to get over my fear, and act or answer right away.

6.  Wishful Thinking.  If I don’t act, maybe the problem will disappear and no one will ever have to do anything.  Wouldn’t that be nice?

7.  The Easy Way Out.  I often believe that there is a quick and easy answer, which I will think of tomorrow or next week.  (Or never.)

5  Tips of How to Delegate

1.  Give Away the ENTIRE Task.  Nearly 20 years ago I started a poetry magazine called Rattle. Since the journal is a secondary project for me, I have relied on my editors to run Rattle.  My present editor Tim has brought the Rattle to a whole new level. He personally works with our 20,000 contributors and selects the poems for each issue. I approve his suggestions, conduct author interviews, and sign checks. Tim does everything else.  Thanks to the help of my editor, Rattle works, so I don’t have to.  By comparison, my poetry mentor (who encouraged me to launch Rattle) publishes his own poetry journal but he does all the work himself  — and issues are usually two or three years apart.

2.  Pay.  I don’t cut my own hair.  I delegate that task to someone who has the equipment and expertise to do the job.  My assistant has gradually assumed the role of talking to our investors.  Just because I can do something, or just because I have done a task for years, does not mean that I should be doing it today.

3.  Trust.  There are many people in the world who are just as good as I am at solving problems.  My marketing team promotes my book People Tools and my blog.  I write, show up at appearances, and direct overall strategy.

4.  Accept a Blemish.  Hindsight is grand.  I can always improve on a process or performance when I look at it later.  So can you. It’s easy for each of us to believe that if we had performed the work it would have been done better. Don’t believe that.  Blemishes will occur no matter who does the job.

5.  Fear is Just Fear.  When I consider giving away a task I often experience a sense of fear.  I fear that the work won’t be done well, and I fear losing control.  But when I ignore my fear and delegate anyway the result is always better.  My fear, it turns out, is irrational.

Try these tips out for yourself. They’ve worked well for me. The next time a new task pops up, your first reaction will be, “Who can I give this to

President of a commercial real estate company worth $1.5 billion dollars and New York Times bestselling author, Alan Fox shares his powerful advice on careers, relationships and self-improvement in his award winning series PEOPLE TOOLS. Alan has degrees in accounting, law, education, and professional writing. He was employed as a Tax Supervisor for a national CPA firm, established his own law firm, and then founded his commercial real estate company in 1968. Alan has recently been featured on The Meredith Vieira and Steve Harvey shows. Discover more about Alan at www.alancfox.com