I’ve lost count how many developers I’ve worked with on web projects big and small. One thing I’ll never forget is the first developer I ever met. I’m going to share a story about him that helped teach me how to “talk code.” I’ll change his name for privacy sake, we will call this guy Arnold.

The Story Of Arnold, My Friend Of 3 Years Who May Or May Not Own A Cat 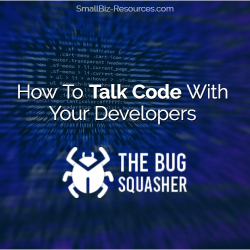 I met Arnold early on in my marketing career. At the time he was a junior developer. Think of him as the guy who fixes those annoying 404 errors, updates pages and manages site bugs. The first words he ever said to me were, “Hey, did you back this up?” It was an interesting comment because I had noticed some thin scratches on his forearm and asked if he had a cat. My gut told me he did, but he never answered. He was all business.

Arnold wasn’t much for conversation, jokes, or even people. He had a flat voice and when he locked eyes with you, it felt like he was looking past you reading The Matrix codes on the walls.

The few times we grabbed lunch together he’d only speak about work. He’d only talk code, nothing personal. That was life for him. If it didn’t have a zero and one behind it where was the logic in “backing this up” and continuing?

What Arnold Taught Me About Developers

Coding is a lonely profession. You spend hours by yourself creating something new and or debugging an issue. It’s a lot of trial and error with small victories peppered in between with little to no audience to appreciate them.

Owning a digital agency I eventually hired a couple Arnold’s on my team. Serious. Direct. All about that coder life. Possible cat owners.

I’ll never forget one time, one of the Arnolds took a client call. Now usually this never happened. Usually, the guys are coding and there’s a project manager of some sort acting as the buffer. But not today, today that call got through.

Arnold was very direct with the client. The client was calling about a site bug and Arnold had a list of questions he needed to be answered to diagnose the issue. Some questions the client knew, most they didn’t.

Arnold showed me how much time we waste talking. First Arnold talking with the client, then the client with me, and finally me circling back with Arnold.

The Problem Is Time Is Money

In our line of work, time is billable. We are trading hours for dollars all week long. Arnold didn’t do anything wrong in this situation. He was just doing his job.

But what if there was a better way? What if there was a way you could diagnose site issues and ask thirty different questions from your client without ever putting them on the spot? And what if you could take those answers and share them with the Arnold’s of the world via an easy to understand report, screenshot heck even a video…what would that world look like?

It would be The Bug Squasher. I know sometimes seeing is believing, so here’s a quick review from a YouTuber going through the platform: https://youtu.be/ZpIjZdW5JCg

The secret to a web firm being successful is having ultra easy communication. I’ve had so many positive and negative experiences as a result of communication it got me thinking of a better way.

So I talked with my team and we built a tool for developers, freelancers, web agencies, the Arnold’s of the universe.

As a result, it’s cut down endless communication exchanges, gives developers more time to work and has made our team more professional by providing a higher level of service.

So What Can You Take From This?

Sometimes talking with a developer isn’t about sitting down and having an hour-long conversation. Sometimes it’s just about providing a clear scope of work for them to follow that they can “back up.”

Developing a Mobile-First Identity as a Small Business
Amazon Selling Tips: What You Need to Do Before Launching Your First Product
Three Tips to Keep Your Online Store Competitive

Kirk Deis has been featured on Forbes, Podcasts, and radio shows in the US. He is the CEO and Founder of two companies - Treehouse 51 a digital agency in Newport Beach, California and The Bug Squasher a universal web app that helps you diagnosis site issues.