Tasso is currently the CEO & Co-Founder of Numa. Previously he was an Entrepreneur in Residence at Silicon Valley-based venture capital firm, DFJ and also founded Location Labs, an early pioneer in mobile and location-based technology. He built it to 250+ people and eventually sold Location Labs for $220M with only $19M of primary capital invested. Location Labs was profitable for seven consecutive years and was an INC 500 company. He was also an Ernst &Young Entrepreneur of the Year Finalist Award winner. Before Location Labs, Tasso worked as Vice President for Claridge Investments (Bronfman Family Office) and as an associate in the merchant banking group of Donaldson Lufkin Jenrette. Tasso started his career at Bain & Co where he was the highest ranked associate in his class. He has an MBA from Harvard Business School and Bachelor of Commerce from McGill University in Montreal 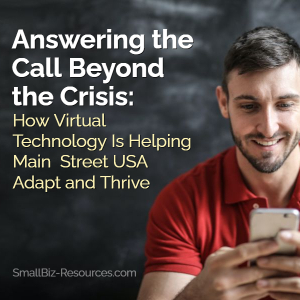 While calling someone seems old school in our fast-paced digital world, the majority of consumers—60 percent—still initiate their first contact with local businesses via phone after finding them …

Continue Reading about Answering the Call Beyond the Crisis: How Virtual Technology Is Helping Main Street USA Adapt and Thrive →