About Steve A Klein

Steve A Klein works with companies to improve productivity and results. Over the last 36 years, Steve has helped develop thousands in businesses and organizations, both large and small, as he has helped them create and deal with change. Steve speaks and facilitates internationally about the psychology of success, leadership, communication, behavior change, time organization, sales and customer satisfaction. A former radio journalist, he has been interviewed by newspapers and magazines, has been a guest on radio and TV, and has produced televised leadership training. Steve also hosts PlayMakers Talk Show on Dallas-Fort Worth’s 770 KAAM and is the author of “Sell When You See the Whites of their Eyes.” 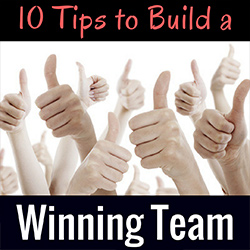 Successful Leaders understand that teamwork is the glue that holds the organization together. Without teamwork, companies fail, employees quit, or even worse, employees quit mentally but remain on the …

Continue Reading about 10 Tips to Build a Winning Team →